First and foremost, take the title literally. This is not some ideological rambling on the 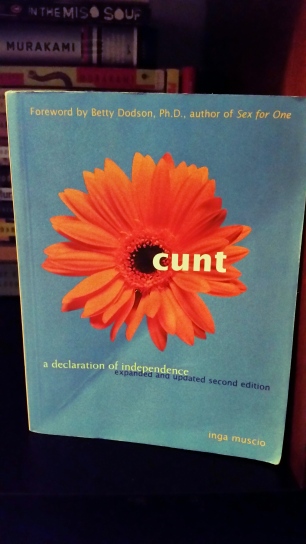 feminist movement or feminist expression. This is straight-up talk about your fucking cunt.

Muscio embraces a very holistic and almost neo-pagan approach to being a woman or as she proclaims a goddess. I found her passion and her experiences charming, if not quite elegant. She talks about everything from menstruation to abortion to activism. I admire her unabashed love for her blood towel and the way she has followed the moon phases to know her own body better. The level of deep love and respect she has for her body is akin to religious zealotry. While I don’t think I can ever be that type of girl (one who is dedicated enough to chart the moon every night), I surely admire her power.

Reading other reviews on Goodreads, I noticed that many people were critical of how she spoke against men and the male-dominated world. But to paraphrase from another feminist, Rebecca Solnit, when a woman starts talking about a man and the patriarchy, we may start off at describing something small, petty and patronizing and end with rape and murder. The violence against women and the dangers that a male dominated society poses to anybody with a cunt – it’s hard for some people, women included, to criticize because we have been bred to accept it.

I can’t say that I agree with everything in this book. But I do think it is a great womanifesto that all women of all ages should read. For example, I don’t agree with the glorification of whoredom without taking into consideration the sexual abuse, physical abuse, drug abuse and sex trafficking that happens because of prostitution. Furthermore, I believe that “whores” are created for the male gaze and for male desire. While she doesn’t specify too much about what type she’s referring to when she talks about “whores,” the impression is that she is referring to sexually empowered women who choose to sell their bodies. She refers to them as goddesses or priestesses. And teaching women and teaching men how to be sexually free is supposedly the greatest thing in the world. Ehh…Whatevs.

However, where I think she shines is when she talks about womanhood, sisterhood and motherhood and being “cuntlovin’. “Women should support each other. Women should look out for one another. Friends should make sure other friends get home safely. Women should not judge other women, etc…, if a woman in the community has been sexually harassed, all other women should harass the harasser. We should fill up his car with Limburger cheese and tell his new girlfriend that he’s an abuser. Embarrass the shit out of him.

And to end with a few fave quotes:

“Why did we fuck those boys who never exactly made our clits pound out the Bohemian Rhapsody in the first place? What were we doing? Did we love ourselves at all? We certainly mustn’t have, or we would at the very least, have practiced safe sex.”

“The enforced silence of women allows men’s fear of us and our sexual power to reign unchallenged. Thus ,the wisdom of brilliant people such as Audre Lorde is not venerated, and we are still sent to school where idiotic puds like Aristotle are worshipped.” 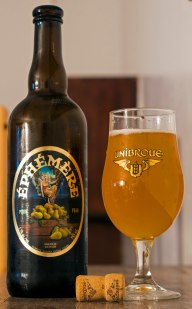 I’m pairing this book with a fruit beer, Éphémère Pomme. This beer drinks like a cider or a white spritzer with a hint of apple. It’s light and drinkable without being too sweet. This book was fun and informative and made me feel happy as I read it, which made me want to drink something fun.