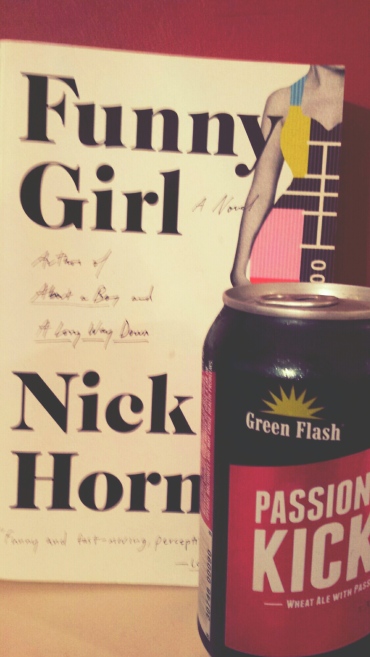 Few if any authors capture obsessive and hapless male characters as well as Nick Hornby, so I was hesitant to start Funny Girl after picking up my copy because Hornby tries to capture female characters as well but often falls a little flat.  It was a wonderful surprise for me at how wonderful Hornby’s titular funny girl, Sophie Straw, really is.  Born Barbara Parker, the character is funny, charismatic, and sublimely well rounded.  After winning the Miss Liverpool title in the first few pages of the book, Barbara realizes that isn’t the life she wants. She relinquishes the title and runs to London where she wants to be the next Lucille Ball.

Barbara, now going by the stage name Sophie Shaw goes to read for a BBC comedy and the writers fall in love with her presence and rewrite the script around her.  At this point Hornby takes his only misstep, a pretty large one, he shifts the story from not just Sophie but to the two writers Tony and Bill, the producer Dennis and even her costar Clive.  It’s sad because Sophie is such a wonderful character but also understandable as Hornby starts to tackle a lot more than just a quirky sitcom star.

The setting is 1960s London where homosexuality is a crime, a woman is just meant to look good and find a man, and comedy is viewed as an inferior form of  entertainment. Hornby uses Sophie’s small town upbringing as a contrast with the views of the optimistic and worldly Dennis and the jaded Clive.  The big reason for the shift is we see this world through the eyes of Tony a bisexual who has opted to be happy in the marriage to his wife June while Bill struggles with both his homosexuality, as well as his desire to create something society deems as real art.

Hornby manages to discuss a lot of serious issues such as sexuality, sexism, repression, elitism, and so much more all while still giving a fun, enjoyable read.  Even with all their faults and failures, he loves these characters that he has created but none more than Sophie. “She wasn’t the sort of catch one could take home and show off to people; she was the sort of catch that drags the angler off the end of the pier and pulls him out to sea before tearing him to pieces as he’s drowning. He shouldn’t have been fishing at all, not when he was so ill-equipped.” That line wasn’t just about a potential male suitor, but all the guys that encounter her as she is the catalyst for where their lives go from here.

I decided to pair this book with Passion Fruit Kicker by Green Flash Brewery.  I don’t usually drink wheat or fruit beers, so it felt appropriate for such an ambitious novel from Hornby.  It helps that this new experience in both beer and novel came from consistent favorites in Green Flash and Nick Hornby.