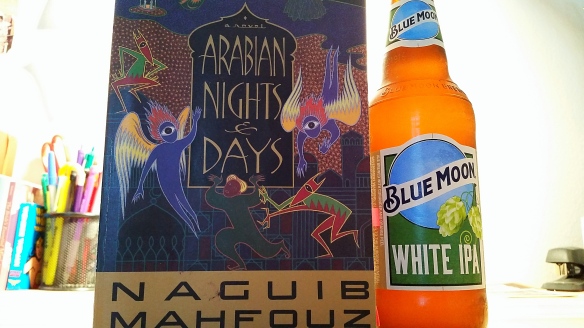 In Arabian Nights and Days, Mahfouz entwines both social and individual morality. This novel really made me think and question how I view people, society, and morality. If these characters abandoned their beliefs effortlessly in these exceptional circumstances, then one has to wonder: did they ever really have any morals? Were they ever inherently good or were they only good because they had to be? This book was published in 1979 and is still insanely relevant and will continue to be as long as humans remain… well, human.

Mahfouz utilizes genies to explore and analyze humanity’s willingness to abandon their morality and conversely the deep-rooted good people who do the exact opposite. I couldn’t help but repeatedly think about The Walking Dead while reading this. Although both seem very different at first glance, the concept of morality is examined in both narrations. When the zombies attack, everyone and everything goes to shit. Once viewed as noble individuals suddenly became trigger-happy rapists and selfish, thieving, liars.

Throughout Arabian Nights and Days, Mahfouz reminds us that simply because someone presents an appearance of being moral it does not necessarily mean they are. Morality is found etched in a person’s very being; it cannot be altered, regardless of the situation. It should not matter what may happen to that individual, they will keep those beliefs and principles. This is important to view in society today where there are numerous wolves in sheep’s clothing and many cowards disguised as heroes, whether it is in politics, work, or even within our own families. Mahfouz allows the reader to ponder these moral issues from the safe distance of an observer. Towards the beginning of the novel, Umm Saad tells Sanaan al-Gamali, “Under the skin of certain humans lie savage beasts.” This sentence sums up the entire novel. When an individual is put into a dire situation, one can truly view what makes up the person. Arabian Nights and Days leaves the reader wondering if they, themselves, are in fact savage beasts.

I chose to pair this novel with Blue Moon‘s White IPA and (just like the novel) I surprisingly really dug it. So this beer bears similar qualities to other IPAs but the flavoring has a certain twist to it, I’m assuming it’s the exclusive hop strain, Huell Melon. I assumed this was going to be a shitty IPA but I was wrong. Just like some people may seem to be really moral and noble, they may just be deviants and cowards. You never know, haha.