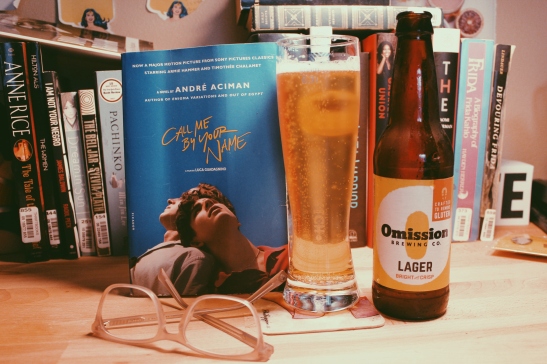 Call Me By Your Name is written in a manner that is somewhat reminiscent of the days of old when people wrote about their love and lust for one another so painfully eloquent that it penetrated deep into the reader’s being. Their words bordered on the obsessive, “That foot in the water– I could have kissed every toe on it. Then kissed his ankles and his knees” (27). That is exactly what Elio’s thoughts are like. This book is so painfully relatable to my past self. Actually, to anyone who has been in love, been in lust, been so enamored by another being that all of your thoughts are a jumbled heap of praise, admiration, captivation, self-loathing, and brooding amongst over things, “What’s liking when we’re talking about worshipping?” (103). This is an ode to adolescent love, teenage lust.

In the instance in which a movie adaptation is created for a book, I usually favor and enjoy the book more. This is the first time I have loved both book and movie for telling the same story but in different ways, from different perspectives. They compliment each other, in my opinion. Perhaps I would have a different opinion had I read the novel prior to seeing the movie, but I’m glad it turned out this way.

Pointless Side Note: Towards the end of the book (not a spoiler, promise), Elio asks Oliver, “Do these things die out on their own or do some things need generations and lifetimes to sort themselves out?” I found this interesting mostly because it reminded me of something I read in Louise Erdrich’s LaRose, “Can’t solve that loneliness. It sets deep in a person. Goes down the generations, they say. Takes four generations” (71). The idea that feelings and desires can be so strong that they travel down familial lines is intriguing to me. Something worth delving into when I’m not lazy.

I paired this with Omission Brewing Co’s Lager. I originally wanted to pair this book with an Italian wine because I felt it would be more appropriate, but I’m broke and all I had in my fridge was this beer. I find it still an appropriate pairing. It’s light, crisp and easy to drink akin to the effortless read Aciman’s novel was. It’s a great summer beer and this story is the epitome of summer. See? A decent pairing haha.

“You can always talk to me. I was your age once, my father used to say. The things you feel and think only you have felt, believe me, I’ve lived and suffered through all of them, and more than once– some I’ve never gotten over and others I’m as ignorant about as you are today, yet I know almost every bend, every toll-booth, every chamber in the human heart” (58).

“Now, in the silence of the moment, I stared back, not to defy him, or to show I wasn’t shy any longer, but to surrender, to tell him this is who I am, this is who you are, this is what I want, there is nothing but truth between us now, and where there’s truth there are no barriers, no shifty glances, and if nothing comes of this, let it never be said that either of us was unaware of what might happen” (78).

“…and even if this is all he is willing to give, I’ll take it– I’ll settle for less, even, if only to live with these threadbare scraps” (104).

“In a few days, you’ll be back, and you’ll be alone, and you’ll hate it, so don’t let anything catch you unprepared. Be warned. I had rehearsed losing him not just to ward off suffering by taking it in small doses beforehand, but, as all superstitious people do, to see if my willingness to accept the very worst might induce fate to soften its blow. Like soldiers trained to fight by night, I lived in the dark so as not to be blinded when darkness came. Rehearse the pain to dull pain. Homeopathically” (212).