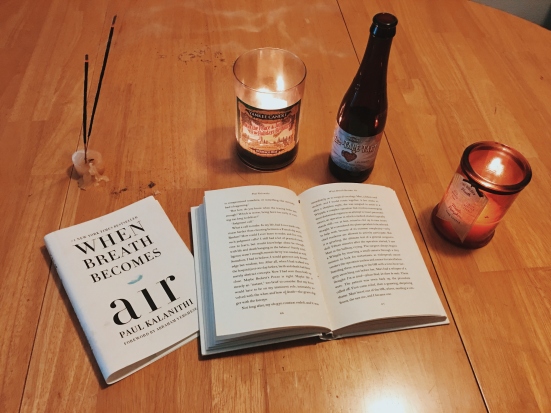 When Breath Becomes Air is heartbreakingly beautiful. A young neurosurgeon with a love for literature is diagnosed with Stage IV lung cancer and in his attempt to understand morality and death, he teaches us how to live.

Kalanithi’s identity in this book is as both doctor and patient or as he puts it, as subject and then direct object. He gives readers an insight into his experiences and opinions as a doctor. Then, once diagnosed, he struggles with the idea of how to live. He says, “The future I had imagined, the one just about to be realized, the culmination of decades of striving, evaporated.” Always eloquent, Kalanithi recounts his struggles and his decisions. A great example, and one that I believe bears witness to the depth of his character and his capacity to live, is when he and his wife discuss if they should have a child:

” ‘Will having a newborn distract from the time we have together?’ She asked. ‘Don’t you think that goodbye to your child will make your death more painful?’

‘Wouldn’t it be great if it did?’ I said. Lucy and I both felt that life wasn’t about avoiding suffering.”

The hard choices that he had to face and the love and grief that are intermingled will bring you to tears many times throughout his book, but still, read on. Philosophical, raw, eloquent and powerful, this book’s premise is about facing death and about leaving something behind; yet what we really learn is how to live: ceaselessly striving.

“When there’s no place for the scalpel, words are the surgeon’s only tool.”

“I don’t think I ever spent a minute of any day wondering why I did this work, or whether it was worth it. The call to protect life – and not merely life but another’s identity; it is perhaps not too much to say another soul – was obvious in its sacredness.”

“I searched for a question to bring understanding. None was forthcoming. I could only imagine the overwhelming guilt, like a tidal wave, but had lifted him up and off that building.” – describing how he felt when he found out a friend and colleague had committed suicide by jumping off the roof of the hospital.

“The secret is to know that the deck is stacked, that you will lose, that your hands or judgment will slip, and yet still struggle to win for your patients. You can’t ever reach perfection, but you can believe in an asymptote toward which you are ceaselessly striving.”

“What happened to Paul was tragic, but he was not a tragedy. I expected to feel only empty and heartbroken after Paul died. It never occurred to me that you could love someone the same way after he was gone, that I could continue to feel such love and gratitude alongside the terrible sorrow, the grief so heavy that in times I shiver and moan under the weight of it.” – Lucy, Paul’s wife

I’m pairing this book with Boulevard Brewing‘s Tell-Tale Tart, a slightly sour ale. I chose this brew because even though not everyone enjoys a sour ale, the tartness seemed to fit this sorrowful yet powerfully inspirational book. Add that the name of the brew is a play on words regarding literature, Poe’s Tell-Tale Heart, and it seemed like the perfect pairing for Kalanithi since he was a lover of literature. He majored in English literature before turning to neurosurgery and always struggled with what to do first – medicine or writing. It’s clear that he was accomplished at both. As we see from this book, he was a brave and brilliant man. It was only time that was against him.